Posted on September 17, 2014 by wpilkington in Information, News 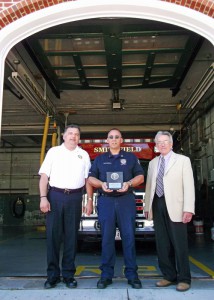 Captain Waterman was nominated by Smithfield Fire Chief Robert Seltzer and the award was presented by James Stein of Liberty Mutual Insurance. The award was given at the Town’s annual employee cook-out on September 17th, 2014 at Smithfield Town Hall..

Captain Waterman is a 32 year veteran of the department. Prior to his 32 career years, he was a call firefighter with this department. He has been the Fire Marshal for the last 8 years. Captain Waterman has done an excellent job as Fire Marshal and is a stickler for fire code enforcement. In addition to the fire code, he oversees the education component of our fire prevention division. He has a Lieutenant assigned to public education and between the two they present various forums to include fire extinguisher training, fire prevention in schools and daycares, and a robust fire prevention “Saturday” open house once a year in October.

About the Firemark Award
While fires are riddled with chaos and tragedy, they also spotlight the tremendous good displayed by our nation’s firefighters – good that is embodied by the selfless deeds of brave men and women who enter burning homes to save victims, or devote countless hours to educating families on fire prevention.

You can nominate a firefighter for the Liberty Mutual Firemark Award by visiting www.libertymutual.com/firemarkaward

History of the Firemark Award
Twenty years ago, Liberty Mutual began a local award program to recognize firefighters throughout the country who best represent their communities through courageous acts and who best demonstrate the firefighter’s selfless spirit. Our award took its name from the “firemark” – a leaden plate in the form of a phoenix rising from the ashes, which American fire offices in the 18th and 19th centuries used to mark the houses they insured.

To this day, the firemark remains to us a symbol of the valor and selfless spirit of  thousands of men and women – career and volunteer – who safeguard their communities.

About Liberty Mutual’s Commitment to Fire Safety
Liberty Mutual has more than 400 offices around the country that work closely with fire departments, schools and community organizations to conduct a variety of safety programs; many of which focus on fire prevention. We also invest significant resources into training our claims professionals and customers about fire safety and suppression ystems.