Today we take it for granted that when there’s a fire, the fire department will come. It’s hard to imagine a time when Smithfield didn’t have a fire department, and home fire protection consisted of a leather bucket kept by the door. But such a time did exist – for almost 140 years! What follows is the story of how Smithfield obtained its first fire engine. 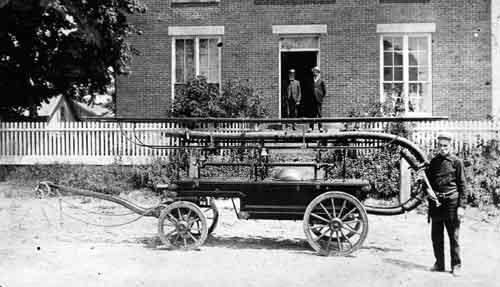 On the night of June 20, 1870, a terrific storm swept across the area. Lightning flashed and thunder boomed as rain pelted the ground. About eleven o’clock, as the inhabitants of Greenville waited out the storm secure in their homes, the cry of fire went out through the village. Lightning had struck Messrs Whipple & Co.’s wheelwright shop located in the heart of Greenville.

Volunteers rushed to the scene with their buckets but it was no use. The fire had gotten a good head start and the business was soon engulfed in flames. The fire then spread to the building next door which contained a business operated by William Tobey, and it soon became apparent that this building would be lost too.

When it was over, both buildings had burned to the ground. The wheelwright shop, although a total loss amounting to $8.500, was partially insured. Mr. Tobey’s business was not insured, and his losses were estimated to be $5.000. But fortunately most of his goods were saved, although somewhat damaged, having been carried from the building by the volunteers before the flames could reach them.

One man was seriously injured at the fire when he fell from a ladder.

Shortly afterward, it became apparent to the citizens of Greenville that something more in the way of fire protection was needed to prevent such an occurrence from happening again. Within a month, the town had purchased a hand-pump fire engine with 500 feet of hose at a cost of $1000. 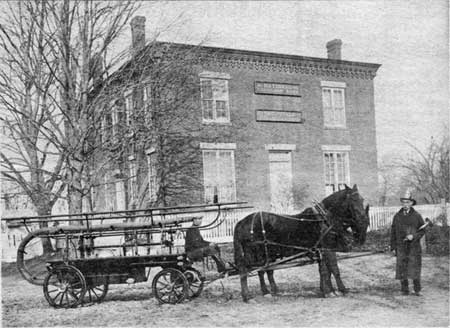 Primitive by today’s standards, and obsolete even for 1870, but a great improvement over bucket brigades, the “new” fire engine needed a team of strong and hearty men to operate it. The engine had two long poles or handles running along each side. At a fire, a suction hose would be dropped into a water source such as a pond or cistern. Then, several men would line up on each side of the engine and begin “pumping” by uniformly moving the poles up and down. The up stroke would draw water up into the tub portion of the engine and the down stroke would shoot the water into another hose which would be operated by other firemen aiming it at the fire. This required teamwork as well as stamina, for it didn’t take long for fatigue to set in and those on the engine would need relief.

The new fire company was dubbed “The Rescue”, and a suitable, centralized location was found to house the apparatus. Andrew B. Whipple was appointed the foreman, and Martin Mann and Ethan C. Thornton were appointed first and second class foremen. Today these ranks are known as chief, and deputy chief.

In a news release published in the Woonsocket Patriot July 29, 1870, on page 2, it was stated, “The community may feel assured of a security from danger by fire which they have never before enjoyed.”
By August, Messrs Whipple was in the process of rebuilding his business but on a much larger scale. When completed, the new building measured 40 by 40 feet, two stories high, with a 24 by 80 foot one story ell attached. This “new” building is no longer standing. 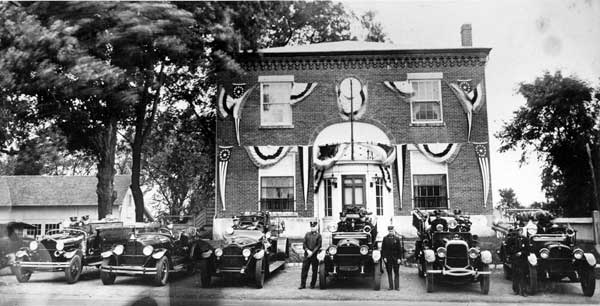