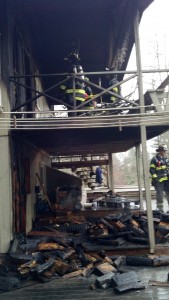 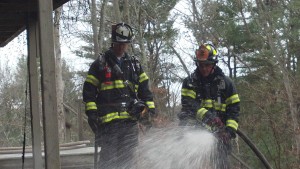 At approximately 3:12 pm on Monday, Smithfield Firefighters responded to number 24 Walter Carey Road for a reported house on fire. Upon arrival of Smithfield Engine 2, heavy fire was showing on the exterior of the house. The crew from Engine 2, assisted by the crews from Engine 1, Ladder 1, and Rescue 1 engaged in a simultaneous interior and exterior attack of the fire. The fire was knocked down and under control in 20 minutes. The fire was held in-check and did not spread any further than was found when fire crews arrived on scene.

There were no injuries reported and all occupants of the house escaped safely. The house suffered moderate damage and is repairable. The Smithfield Fire Department was assisted by a Scituate Water Tanker, Smithfield Police, and the Smithfield Building Official.

The cause of the fire was determined to be from fireplace ashes left in a plastic container near the exterior of the house and near a pile of wood. The pile of wood caught on fire which then spread to the house.

The Smithfield Fire Department warns all homeowners with wood stoves and fireplaces to place ashes in a metal container and then move the container to a remote area on the property, away from the house or any other combustible materials. This is very commonplace for homeowners to improperly discard fireplace ashes and cause accidental fires. Ashes from fireplaces have the ability to maintain heat for several days after they are removed from a fireplace, and therefore should be discarded with care.